This website has been set-up because of my longheld interest in the weather and since the closure of Kilkenny Met. Station in April 2008, there is a real need to provide local weather and climate information.

My site is located within the city borough of Kilkenny about 1 km from the old Met. Station. I have recorded temperatures at the present site since Apr 2007 and since April 2008 have added rain and wind sensors (more about this under Technical Details article). As and from March 2010, it is now a climatological station with daily observations from manual instruments being submitted to Met Eireann (The Irish Meteorological Service).

The site is located in the river Nore valley, about 50m above sea level, near the Linear Park and comparisons with the old Met station at Dunningstown Road have shown it to be, if anything, a slightly cooler site.See comparison table below. Google Map : 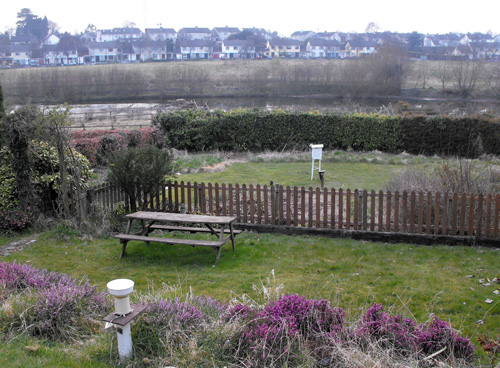 Kilkenny itself is located in the south east of Ireland. It is 60 km from the sea and is surrounded on all sides by hills over 200m. This sheltered location ensures that it is the least windiest spot and records a reasonable range of temperature. It has often registered the daily highest and lowest temperatures in Ireland (and has been known on occasion to exceed the daily UK values too). 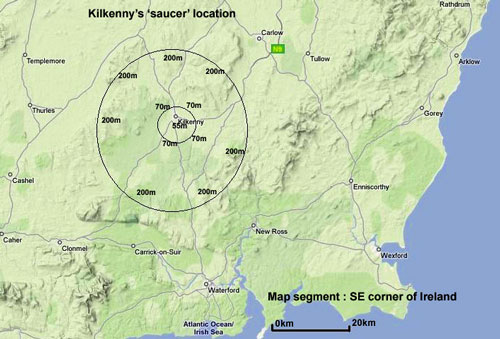 As The Boss, aka Mr.Springteen would say "I come from down in the valley....". Well the best way to see the Nore river valley is to take a canoe trip down it. We managed a short trip in August 2010 when the river was low and weather was fine. For those new to Kilkenny, this 6 minute video will give you an idea of the terrain. You'll notice a typical radiation fog at the end. The night was cold too and despite it being August, we had a ground frost - but it didnt stop us having a great time!

Month by Month Comparison with Kilkenny Meteorological Station (May'07- Mar'08)

Note : Temperatures for this table are based on a 0-24 hr day.

*The live weather data displayed in the top table of the "Weather Now" homepage, is produced by a combination of an Oregon WMR 928 weather station and a Peet Brother's Ultimeter weather station (for wind data). This is connected in turn to a small, low power, Alix 1D (486 type) storage device, driven by special software designed by Meteohub. The data is then pushed out via broadband and does not require the use of a costly PC running 24/7. For more on this see :      http://www.meteohub.de/joomla/index.php

*Air temperatures are also measured using British Standard 692 type max and min thermometers. Rainfall is also recorded using a Met Éireann issued standard 5" copper rain gauge. These temperature and rainfall figures will be very accurate and calibrated and are tabulated in a separate "Official" table also displayed further down on the Weather Now homepage. Both these and the electronic Oregon sensors are all housed in a Met Éireann standard Stevenson Screen i.e. a typical standard exposure.

Pictured below is a close up of the interior of the Stevenson's Screen. The screen is identical to the one in operation at Rothamsted, Hertfordshire, UK, which is one of three stations that are used to calculate the "Central England Temperature" (CET), the longest instrumental temperature record in the world. (Rothamsted thus being one of the most important weather stations in all of the UK). 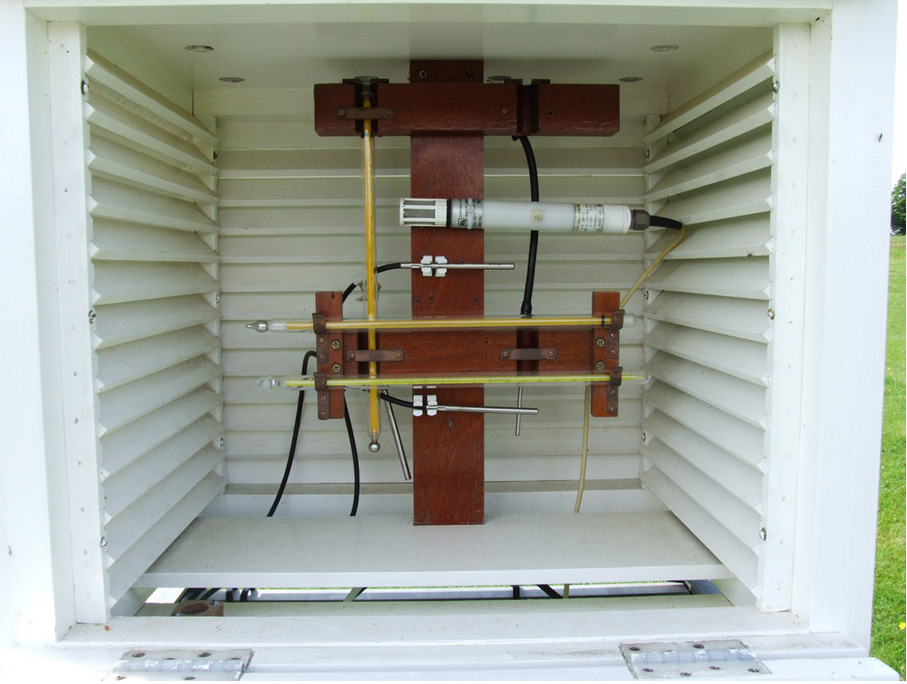 *Accurate wind speed data is more difficult to replicate. Up to August 2013 the wind data was produced by the Oregon WMR928 anemometer. Since that time, the wind data is sampled at a much higher rate by the Peet Brother's anemometer and this is giving readings more in line with official Met Éireann equipment.

*The webcam images (shown on the frontpage) are from a Panasonic BL-C140A network camera. The images are uploaded at 1 minute intervals directly to the website and to the Weather Underground. WU also make up a very useful daily timelapse of the images into a 12 second display. These are available for my site, each day from 9th March 2011 onwards. See this link: Weather Underground : KilkennyWeather Daily Timelapse.

*The website has been designed using Joomla - a free open source framework for web design. More about this at :    http://www.joomla.org/about-joomla.html . . Thanks to Fergus for all his assistance.

*The current weather icons shown on the top of each page come courtesy of Roman Attinger.

*The historic data on Kilkenny Meteorological Station comes from Met Éireann. Thanks to Ky and Niall. For detailed climate averages for Kilkenny, see: http://www.met.ie/climate/kilkenny.asp.  Thanks also to Danno for lightning link and Karl at the IWN for providing access to the Ireland Mesomap

If you have any comments to make or would like any more information - feel free to email me at :

This email address is being protected from spambots. You need JavaScript enabled to view it.