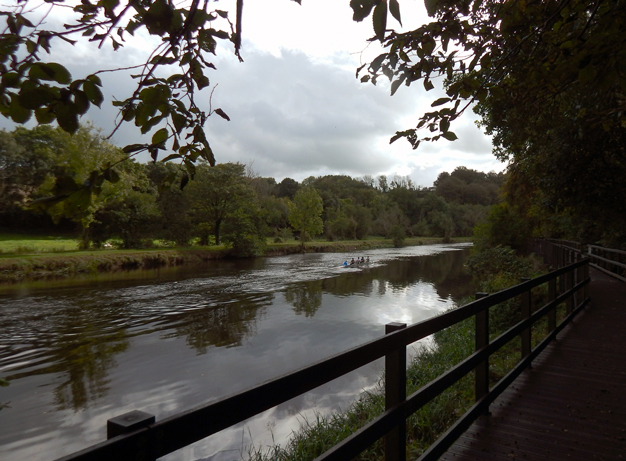 Rowers on the River Barrow, just below Silaire Woods near Graiguenamanagh on a fine day October 8th. The start of the month saw some pleasant weather however after the 15th the heavens truly opened and it ended up the wettest October on record.

There were many mild, wet nights this month with persistent south or south east winds. The overall mean temperature was 12.0° which is well above normal. However there were no warm days with the maximum of 18.0° recorded on the 20th.

The rainfall though was very excessive. It was the wettest October on record with a total of 204.4mm of rain. The second wettest month ever recorded in Kilkenny. Wettest  day was the 22nd with 33.8mm. Top wind gust was 64 km/hr on the 27th. 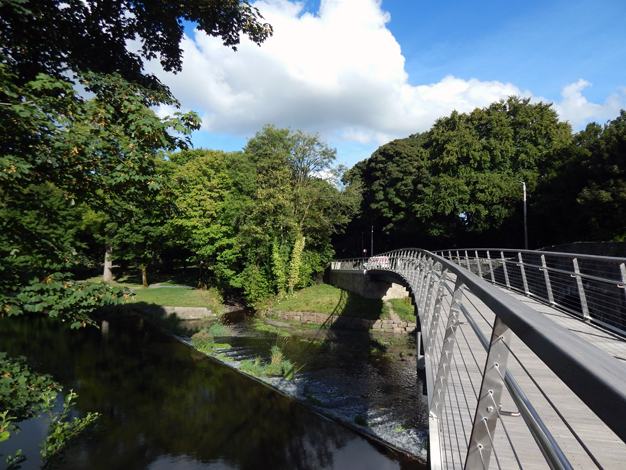 The new pedestrian bridge over the River Deen in Castlecomer on September 4th. The weather quickly changed to autumn mode this month bringing with it some welcome rain.

The mean temperature was just slightly below normal. The warmest day was on the 1st when it reaached 22.5° C. The coldest night was on the 18th when it dipped to 2.5°C. There were 7 nights with ground frost. 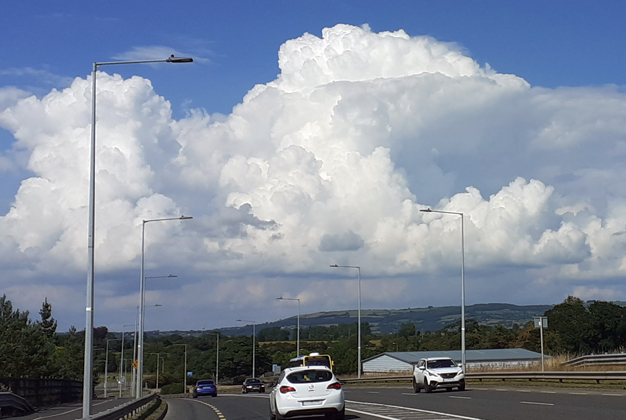 Cumulus congestus clouds towering over the Castlecomer Plateau on the afternoon of August 15th. The clouds continued to build and by evening large cumulonimbus clouds had formed giving frequent lightning and flash floods. A total of 19.5mm was recorded later that day.

It was a very notable month. Overall it was warm, dry and sunny. The mean temperature was 17.1° C but there were also some cool nights. August 12th was the warmest August day on record when it reached 31.3° C. Heatwave conditions persisted from August 9th until August 14th.

Rainfall was very sporadic. Only 6 days had 0.2mm or more and the bulk of the rain (19.5mm) fell on the evening of August 15th during a thunderstorm.

There were no strong winds and the top gust was 46.5 km/hr recorded on the 19th. Following an overall dry,warm summer, the soils had dried out to such an extent that the ground was able to radiate heat quickly during the clear nights and in all there were 6 days with grass minimum below zero. The normal is only 1 day. 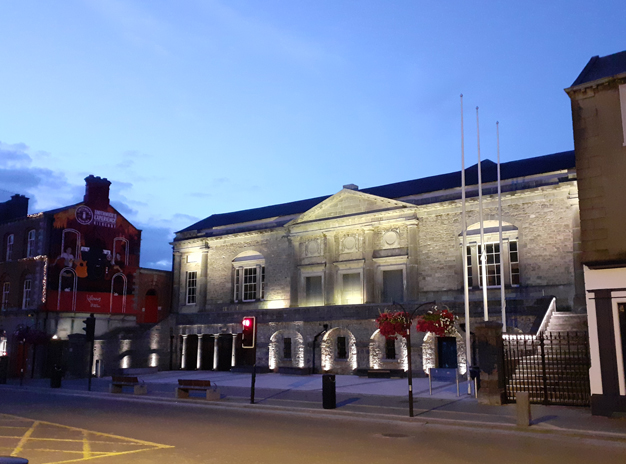 The Courthouse on the 13th July. There were many such fine nights this month. Most of the month was in fact warm and dry with a notable short hot spell between the 17th and 19th.

Warmer than normal. The maximum of 31.2° on the 18th was the highest temperature recorded in Kilkenny for 39 years. There were 5 days when it exceeded 25° Coldest was on the 11th and 28th when 9.0° was recorded. There was no grass frost

Rainfall was sparse. Just over half the normal and half the total fell in a very short space of time in two short bursts at the start and end of the month. Wettest day was 30th with 16.0mm. The top wind gust was only 44 km/hr on 24th. 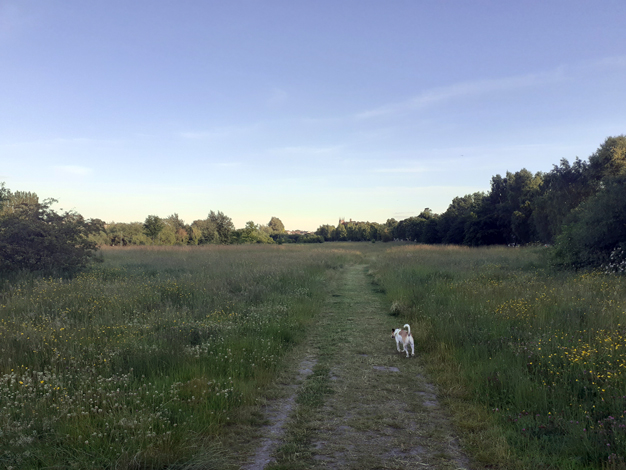 Bishop's Meadows, Kilkenny on a sunny evening on the 15th June. Up to 23rd the weather was dry with some nice sunny days. In the last 7 days there was 40mm of rain and it turned cooler.

Overall it was a pretty normal month. Mean temperature was just 0.3° above normal. The temperature exceed 20° on 8 days and  warmest day was 23rd with 23.7°C. Coldest was on the 2nd with 3.7° recorded. 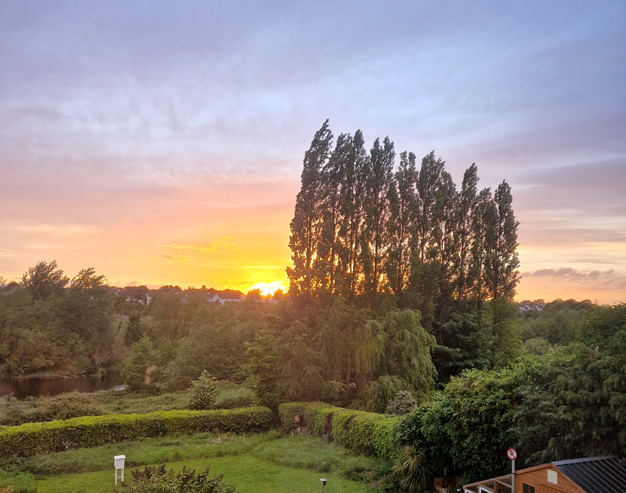 Sunset at the station on May 19th. There were many such pleasant evenings this month, without it ever getting hot. 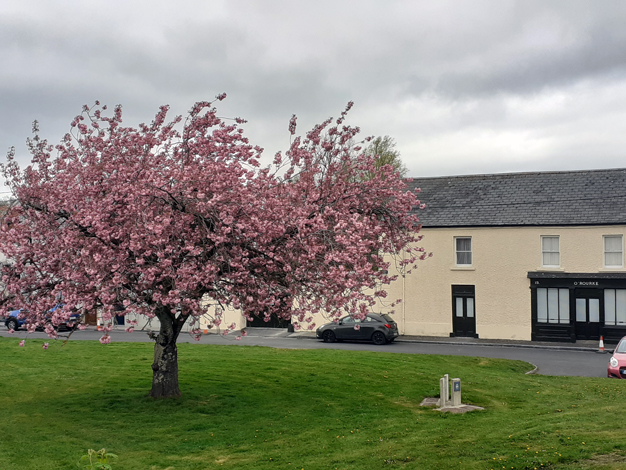 This cherry tree at Green's Bridge was in full bloom on April 16th. This is about 2 weeks earlier than the norm. April saw a lot of dry weather with some warm days but the nights were cool.

April was drier than normal but not as dry as last April. The wettest day came on the last day of the month with 11.3mm recorded. Top wind gust was 66km/hr recorded on the 6th. 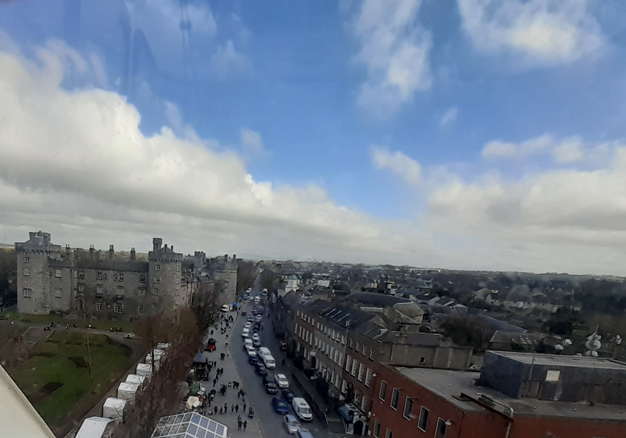 View from the top of the big wheel on the Parade on March 18th. It was certainly a month of two halves with the first half quite broken followed by some lovely anticyclonic weather.

The month saw many cold nights (11 air frosts) but also some lovely sunny days. The mean temperature ended up close to normal. Top temperature was 18.7° on the 24th and coldest was -3.4° on the 5th. March mean was colder than February.

Rainfall was near normal. Half the total fell on one day (March 9th). The 30.7mm was our wettest March day on record.

Top wind gust of 73 km/hr was recorded on the 9th. 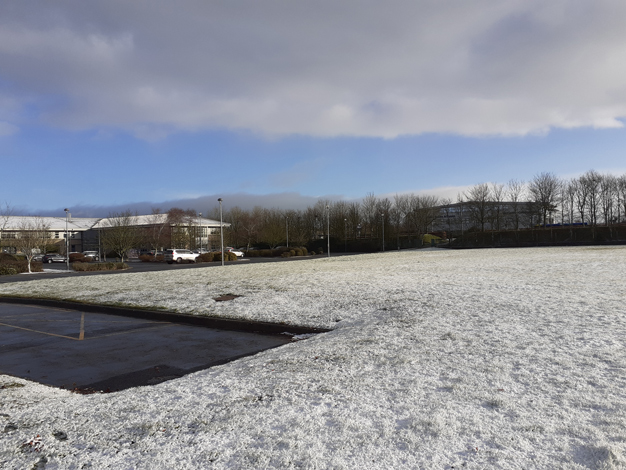 There was a light, temporary fall of snow on February 24th. This picture was taken at the Business and Tech Park at Loughboy. It didn't last for very long and caused no difficulty. Otherwise it was a mild, windy, wet month with little frost.

The wind blew pretty constantly during the month and two storms affected Kilkenny. The first Eunice brought a gust of 85 km/hr followed by Frankln 2 days later on the 20th with a gust of 93 km/hr. 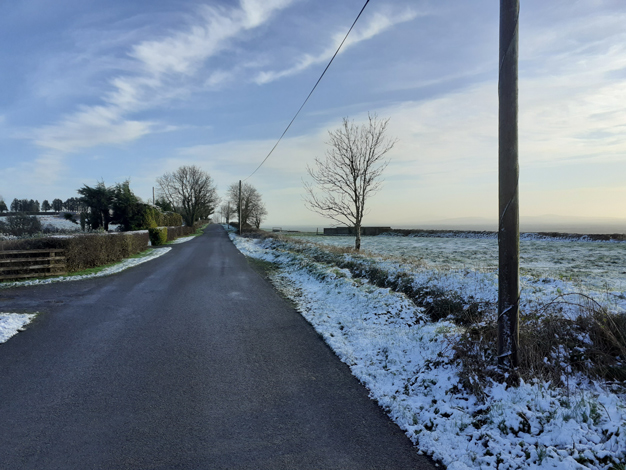 The hills above Kilmanagh went a bit snowy for a time on the morning of January 4th. But no snow on the low ground. There was precious little snow this month as it was a largely dry month after the first 10 days.

The mean temperature was slightly above normal. There was lots of sunshine and the day time temperatures were above normal. With light winds and clear skies it got cold most nights but the frost was never severe. Lowest air temperature was -4.0° on the 17th and there were 11 air frosts. The mildest day was New Year's Day when it reached 13.7° .