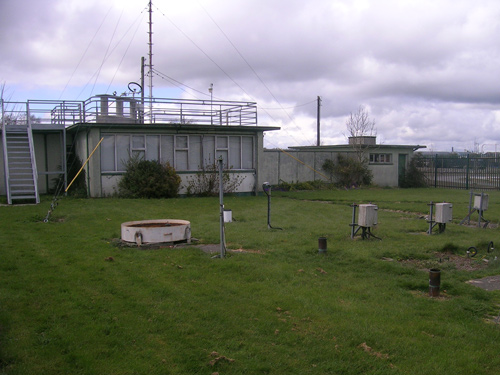 During May 1957, official weather observations commenced again in Kilkenny after a gap of 57 years. The Met Service established the station on a slight hillock just off the Dunningstown Road to the north west of Kilkenny City at 66m above sea level. At that time the site was mostly surrounded by open countryside.

Observations and reports continued at Kilkenny Met. Station until finally in April 2008 the last obs was made and the station closed down. At that stage new housing developments were encroaching on the station. In early 2008 tarmac was laid right up to the perimeter fence (top right of picture). It was unfortunate that the station was closed down - yet it has left behind an important climate legacy and in this age of automation I do not think we will ever again have the level of weather/climate detail provided by the meteorological officers at Kilkenny from 1957-2008.