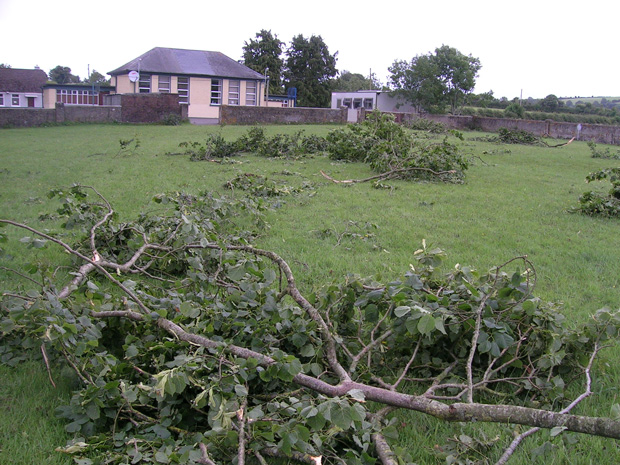 Branches strewn about near Ballysloe N.S. by the tornado

In the early hours of the last day of July 2006 the village of Ballysloe Co. Tipperary was hit by a tornado. Baqllysloe is located about 6km from the Kilkenny border and about 30 km from Kilkenny.  (A tornado was reported to have hit Kilkenny Golf Club in 2008 - however this was investigated and the damage was found to have been caused by a microburst.)

The Ballysloe event was a result of considerable instability in the atmosphere which caused a series of tall cumulonimbus (Cb) type clouds to form. The Cb shower cloud ran parallel to the Slieveardagh Hills (just west of Tullaroan) and a tornado formed and touched down near Ballysloe. There was much damage to trees and a couple of houses were damaged. Luckily no one was hurt by this frightening experience. Strength wise it was estimated to be about a T2 tornado - weak by American standards - but significant for these parts.

Here is an extract from the Tipperary Star:

"Early on Monday morning of last week a wind, believed to be a tornado, hit a group of houses outside the village of Ballysloe and caused extensive damage to three houses. Two young girls had a particularly lucky escape; Naomi O'Gorman and her cousin Megan Shorley from Thurles were asleep in the sitting room of the O'Gorman house at Glengoole when the window was blown in, covering them with glass. When the nine- and ten-year-old tried to make their way out of the room they found the door was stuck, but Naomi's father, Jason, managed to push it in and rescue them. Meanwhile neighbour Neil O'Donoghue found a forty-foot ladder had wrapped itself round the chimney of his house. "