2017 Close Encounter with a Hurricane

Late on the evening of October 15th 2017, Hurricane Ophelia was only 500 miles (800 km) off Mizen Head, County Cork. At 2100 UTC it was still categorised as a category 1 hurricane. This is the closest an official hurricane has been determined, so close to Ireland. Back in September 1961 we also had another close encounter with a hurricane - Hurricane Debbie - however with only very limited satellite data available back then. it is difficult to say exactly when that hurricane changed into an extra tropical storm but by the time it reached Ireland it was no longer a hurricane.

Below I have detailed the background to Hurricane Ophelia and how the resultant storm affected Ireland and Kilkenny in particular.

The  Atlantic hurricane season of 2017 was a very active one. The previous month, September,  set many records. In terms of the Accumulated Cyclone Energy (ACE), which measures the combined strength and duration of tropical storms and hurricanes, September 2017 was the most active month on record, easily breaking the previous record of September 2004.  Overall September was about 3.5 times more active than an average September from 1981-2010.

Hurricane Ophelia began live as a Tropical Depression in the middle of the Atlantic, south west of the Azores Islands at latitude 30 N, longitude 40 W. It barely moved for two days but bolstered by the anomalously warm waters of the Atlantic Ocean this year (sea surface temperatures were running at 1 C to 2 C above normal) it gradually intensified, drifted south east and became a fully fledged hurricane by late October 11th with a central pressure of 990 hPa.

It proceeded in a slow northeast path and it was at that stage the forecast models had identified it would impact Ireland. Over the next 24 hours it didn't move very far but intensified into a powerful category 2 hurricane with mean 1 minute windspeeds of 165 km/hr.

The hurricane moved now in slow northeast path which brought it just south of the Azores Islands. By 3pm on Saturday 14th, it became a very serious category 3 hurricane (marked with red circle in the above chart). It passed just to the south of the Azores island of Sao Miguel. A few trees were knocked but overall there was very little damage as the storm was tightly packed and too far south to directly hit the island.

The hurricane moved in a more rapid north east path taking it west of the Portugal coast. It did not directly affect Portugal - however it did bring up very warm southerly winds which sparked damaging wildfires over Iberia. By 3am on Sunday 15th it was still a powerful category 3 hurricane with top speeds of 185 km/hr and had Ireland in its sights. The image below was taken at 9UTC on Sunday 15th, 24 hours before ex-Opelia reached Ireland.  It clearly shows shows the visible eye of Ophelia, just west of Portugal.

Below is the last chart (the 18 UTC chart) produced by the UK Met Office, showing Ophelia still identified as a hurricane. Just a few hours afterwards Ophelia made the transition from being a tropical cyclone (with a warm core) to an extra-tropical cyclone and became known as "Ex-Ophelia".

With the impending approach of a very unusual storm system, Met Éireann quite wisely decided to issue a nationwide red wind warning on Sunday afternoon, triggering the closure of all schools and colleges on Monday 16th. By 7am in the morning, ex-Ophelia was a very powerful storm situated just off our southwest coast with a central pressure of 958 hPa. The chart below shows the tightly wrapped isobars just to the south and east of the centre. Just a few hours later these very strong winds would hit County Cork.

In Kilkenny, in the early morning between 5am and 6am, some rainfall arrived with the passage of the cold front ahead of the storm. The rainfall totals were not an issue with this storm. The wind though was steadily increasing and it became bright and breezy in Kilkenny. By 9am it was quite warm, a "tropical" 17.4°C and the wind was gusting to 50 km/hr from a southeast direction. By 10am the wind gusts had increased to almost 70 km/hr. Just after noon the gusts increased considerably and it grew dark. By 1pm there was a damaging gust of 106 km/hr and the temperature had dropped back to 13°. There was some squally rain at this stage and there were many reports of trees falling throughout the county, bringing power cuts. I recorded my peak gust of just over 115 km/hr, just after 2pm. See graph below :

These gusts were not record breaking gusts, however it was unusual to have a gust as high as this whilst many of the trees were still in leaf. Hence the large number of trees that fell in Kilkenny. Below is the satellite image of the storm when it was at its peak in Kilkenny with the centre located just to the west near the coast of County Clare and also some images of the fallen trees and damage in and around Kilkenny City.

As mentioned already Ex-Ophelia was not a record breaker in the Kilkenny area. The Kilkenny top gust of 115 km/hr was a good deal less than the top gust of 133 km/hr I recorded during "Storm Darwin" back in February  2014 (See this article). But because of the number of trees still in leaf, the damage and power cuts was nearly as extensive. Other top gusts recorded at Met Éireann stations in the south east were Oak Park, Carlow 111 km/hr, Johnstown Castle, Co.Wexford 115 km/hr. The following private weather stations also in the southeast recorded the following gusts : Ashford, Co. Wicklow 121 km/hr, Tullow, Co. Carlow 118 km/hr  and Durrow, Co Laois 116 km/hr.

But the greatest winds in the country were recorded in County Cork where Roches Point recorded a gust of 156 km/hr and a 10 minute mean windspeed of 111 km/hr. The latter sets a new national October record for 10 minute mean windspeed. (Records back to 1942). There was also very high seas off the south coast with one individual wave measuring 26.1m at the Kinsale Energy Platform. Unfortunately there were three fatalities that can be attributed to this storm in counties Waterford, Tipperary and Louth.

The unusual feature of this storm was its tropical birth and how close a true hurricane came to Ireland. The only other hurricane that as close as this to Ireland was ex-hurricane Debbie in September 1961. In terms of windspeeds Debbie gave stronger gusts in all but the south of the country. Kilkenny's top gust then was 120 km/hr. This image below is a tally of all the hurricanes (windspeeds of 139 km/hr or greater) in the Atlantic Basin back to 1851. Certainly Ophelia stands out on its own, marked with the red square. 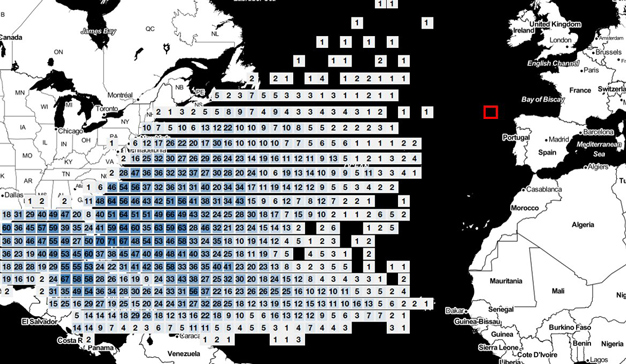 Of particular concern is the frequency of damaging storms that have affected Kilkenny. Kilkenny is known as being one of the least windy spots in Ireland however we have seen four storms with damaging gusts of 110 km/hr or more in the 44 months between February 2014 and October 2017. For this particular storm, many meteorologists will point the finger at the rising sea surface temperatures in the Atlantic as being the cause. As global warming continues at pace, Ireland is going to come increasingly under attack from storms of both tropical and extra tropical origin.