This cold spell will live long in the memory and no doubt will be talked about in many's a year to come. It was more severe then the cold spell the previous January. The mean temperature for the whole month of December was below zero. The only other month when this occurred at Kilkenny was Jan 1963. (It is likely that the mean for Feb 1947 was also below zero - but we do not have any local records for that month). In this article I will try to explain how it all came about and give a flavour of how the landscape of the city changed.

The graph below shows how the temperatures varied during the period 25th November right through to the 27th of December. There were no fewer than 9 "ice days" (days when it fails to rise to  0°C or above). The first morning with lying snow recorded was Nov 27th. The maximum snow depth of 20cm was measured on Dec 7th. The remnants of this snow persisted until Dec 15th. December 16th was the only day of the period when there was no trace of snow remaining. Light flurries fell again early on Dec 17th. Some more fell on the 21st which left a light covering of 3cm for Christmas Day. It was all gone by Dec 26th. 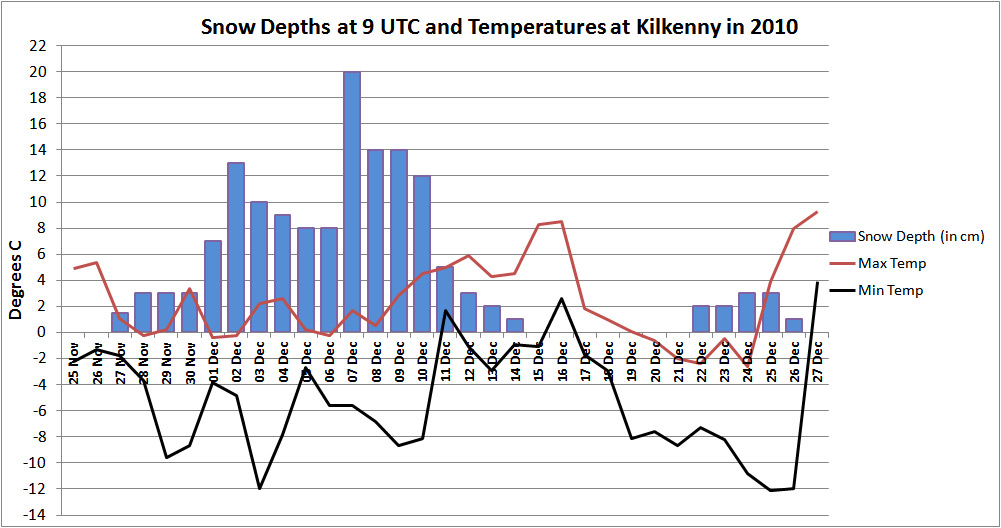 Around this time a large area of high pressure started to build over Greenland and Iceland. This feature proved remarkably persistent over the next month. It steered down a steady stream of air of Arctic origin. You can see from the chart below that the wind direction was northeast - the complete opposite to what we would normally expect in November.  At about 7am on the morning of the 27th, the first of the snow showers had edged in from the Irish Sea and gave the first light covering. 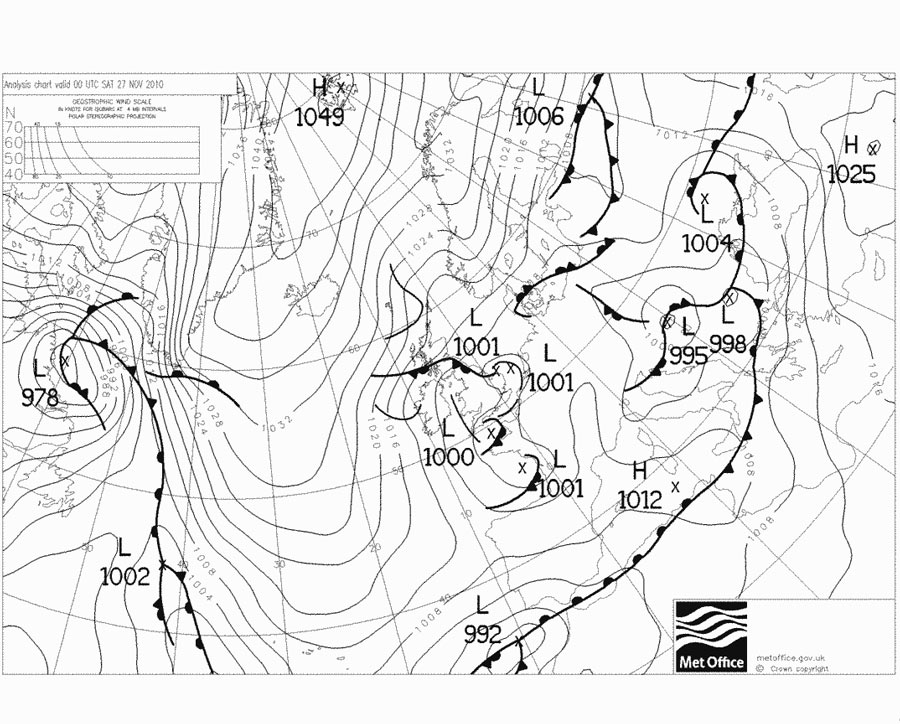 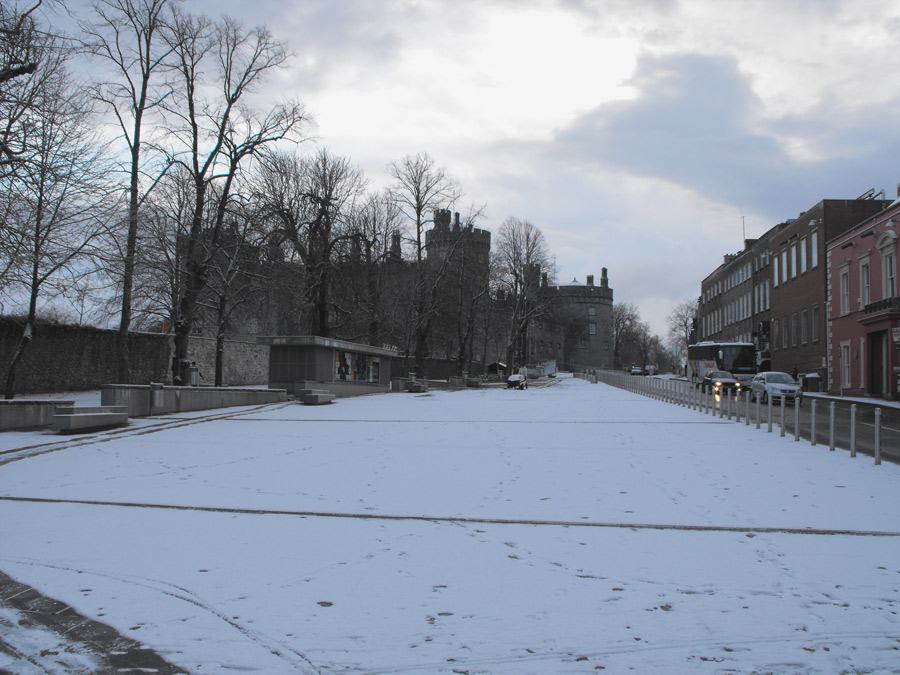 Lying snow in November is unusual at low altitudes in Kilkenny. The light covering of 3cm on the ground on Nov 28th prevented the temperature rising above zero during the day. A rare ice day in November. That night under calm winds the temperature fell sharply to a minimum air temperature of -9.6° C. This was the lowest ever November temperature recorded in Kilkenny in over 50 years of recording, easily breaking the old record of -7.0° 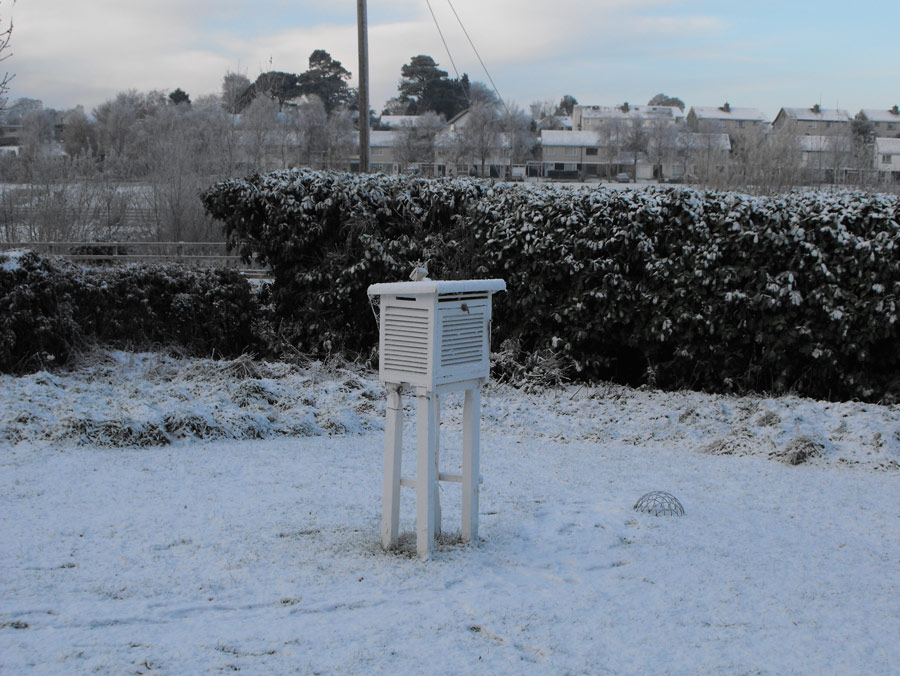 The temperature screen on the morning of November 29th

As November came to a close, more snow fell. By 9am on the 1st there was 7cm on the ground. More snow showers arrived during the day and by the next morning there was a total of 13cm on the ground. The snow at this stage was particularly heavy over the south of the county with as much as 20-25cm on the ground near Mullinavat. The south bound lane of the M9 motorway was blocked for a time with motorists having to use the north bound lane only. The temperatures continued to nose dive. On the morning of the 3rd, a new minimum temperature record for Kilkenny was set when the thermometer dipped to -12.0°. Further south at Mount Juliet, near Thomastown,  the lowest ever December temperature recorded in Ireland, -16.4°, was set. (This record for Ireland did not last very long however as lower temperatures were subsequently recorded in Counties Mayo,Sligo and Tyrone later in the month). 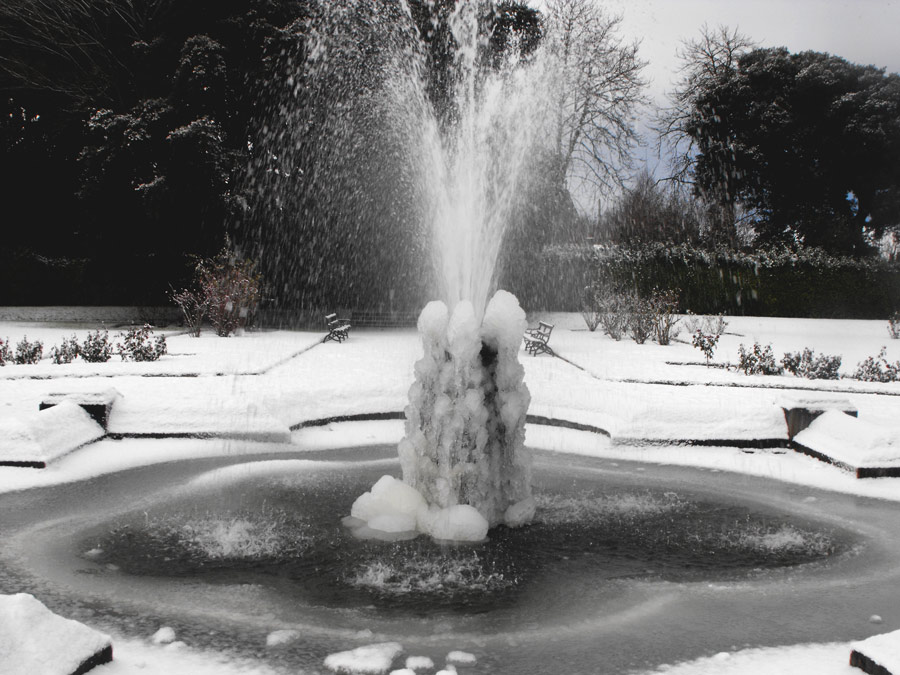 Frozen fountain at the Castle Park early on December 1st 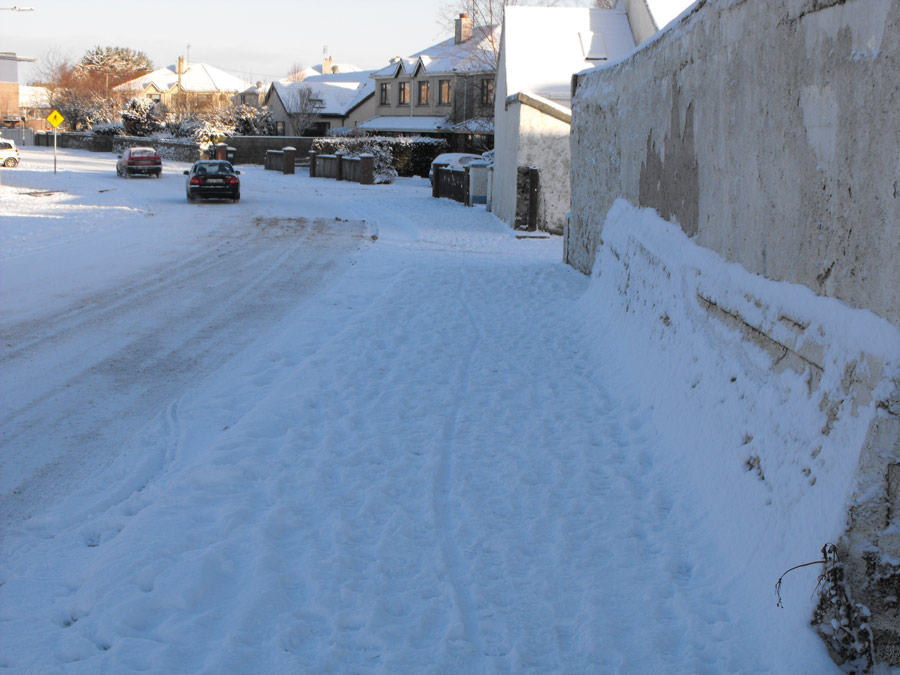 Traffic starting to battle the treacherous road conditions on December 2nd at the Outrath Road, Kilkenny.

Snow remained at a depth of about 8cm (3 inches) right through to December 6th. On that evening there was an unusually heavy fall. The weather chart below shows an occluded weather front off the southeast coast of Ireland at midnight. It seems the remains of that frontal system stalled and became quite active over the Kilkenny area, unlike the previous snow events which were mostly due to persistent snow showers forming over the north Irish Sea and spreading southwestwards. 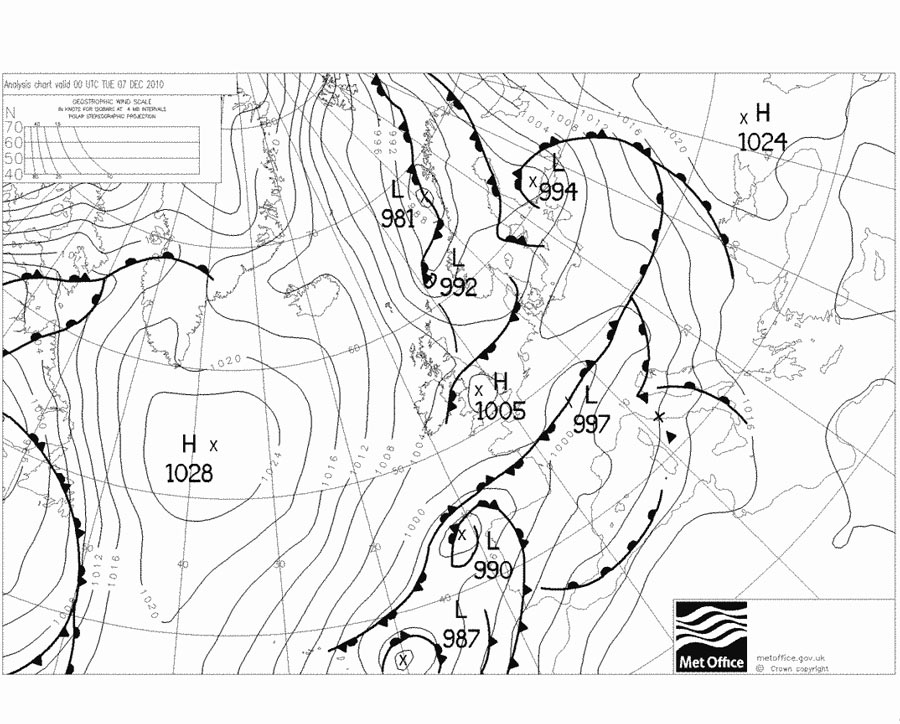 The heavy snow began at around 8pm and fell steadily in big flakes until after midnight. A fresh 14cm had fallen. The combined total of lying snow then measured on the morning of Dec 7th was 20cm (8 inches). I have seen deeper snow, drifted by the wind in Kilkenny (e.g. in Jan 1987 and Jan 1982). However it is the level snow depth that needs to be recorded officially and the 20cm that morning exceeded any depth recorded in the previous 50 years. (note again : there was no official records made back in March 1947, when the snow was very deep). This heavy snow was unusual in that it was at this night only confined to a small area around the city. South of Danesfort and north of Threecastles Co. Kilkenny, there was much less. 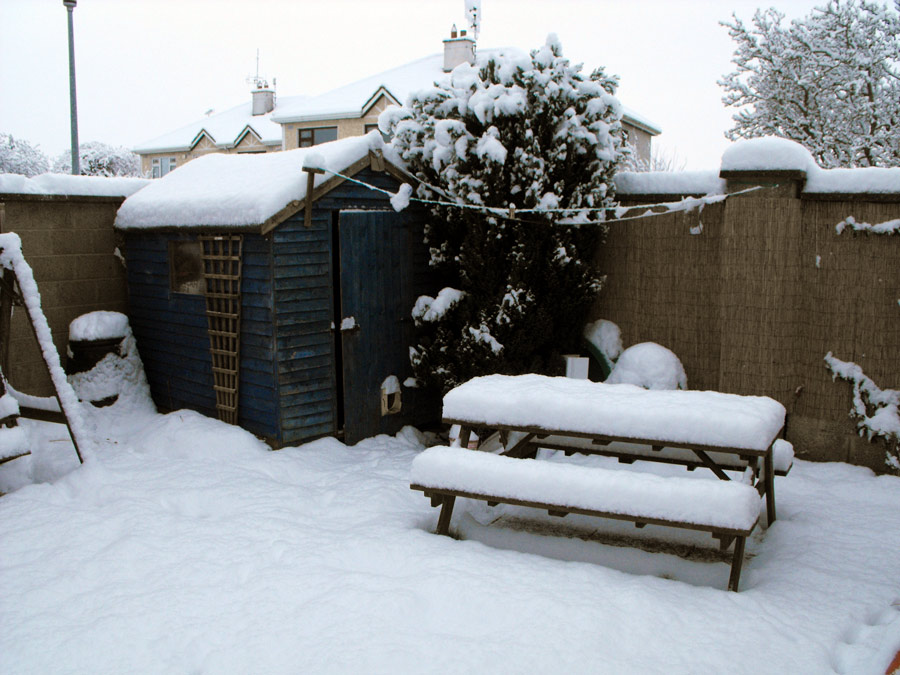 Morning of December 7th : A nice day for a picnic! 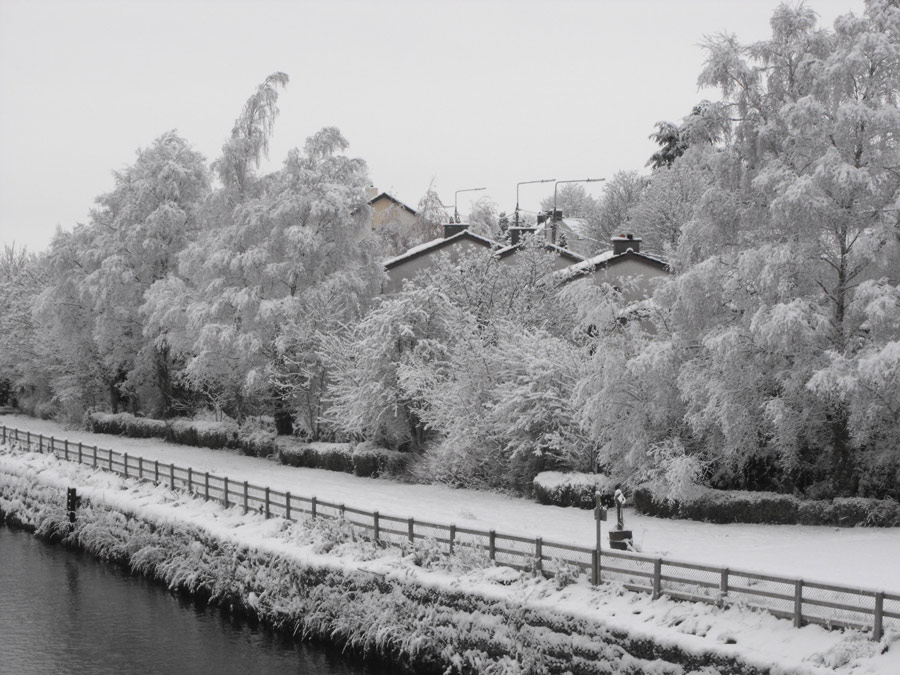 A slight weakening of the high pressure system to our north allowed some milder air of Atlantic origin to arrive in over the country. Temperatures nudged upwards to reach a peak of 8.5° on December 16th - by which time the last remnants of snow had melted away.

But renewed cold arrived down from the north later that day. And later on the 17th, the snow flurries arrived again, sped in from the Irish Sea.

During this period there were some more light spells of snow fed down through Dublin, Kildare, Carlow and on to Kilkenny. The snow though this time was very light, barely noticeable on the ground, until the evening of the 21st when 2cm fell, topped up by another 1cm on the 23rd. Enough to make sure that it would be a white Christmas.

At this time the Dublin and Kildare areas received significant amounts of snow. It seems that Kilkenny marked the terminating point of the snow showers with very little making it to the far south of the county and Tipperary. But it wasn't the snow that was on people's mind then. By Christmas Eve temperatures took a real nose dive. The chart below shows that high pressure was now settling in over the country. 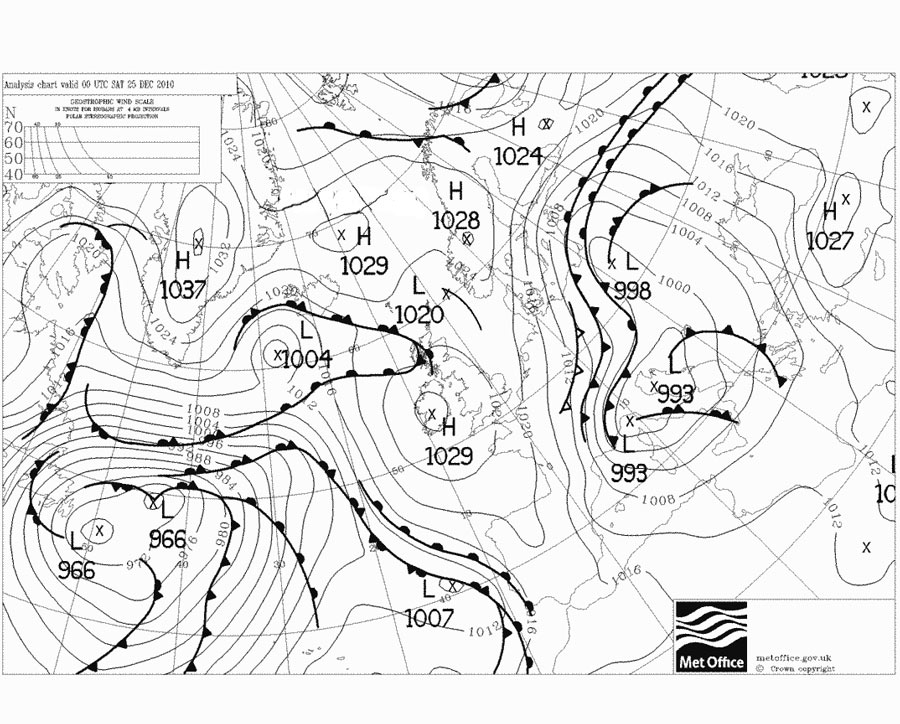 So the cold snap continued unabated. Winds at this stage had fallen light as Christmas neared. There were signs at John's Bridge on Christmas Eve, that the river Nore was starting to freeze over. Early on Christmas morning, the temperature again dipped (slightly lower then earlier in the month ) to -12.1°, which was yet another new December record for Kilkenny. The picture below taken in the afternoon on Christmas Day, shows how a layer of ice had formed on the river Nore from bank to bank. There have been freeze-ups before noted on the smaller Nore tributaries (eg. the river Dinan) but  a freeze-up had never been witnessed before, in the middle of the city. The prolonged extreme cold was no doubt the main reason for this unusual event but I am sure that the recent flood relief scheme was also a contributing factor to this freeze-up. The Nore is quite a fast flowing river, however recent changes to the river have made it slow down considerably in the vicinity of the city. Near calm water will freeze more readily then faster flowing water. See picture below or scroll down to bottom of this page for a short video. 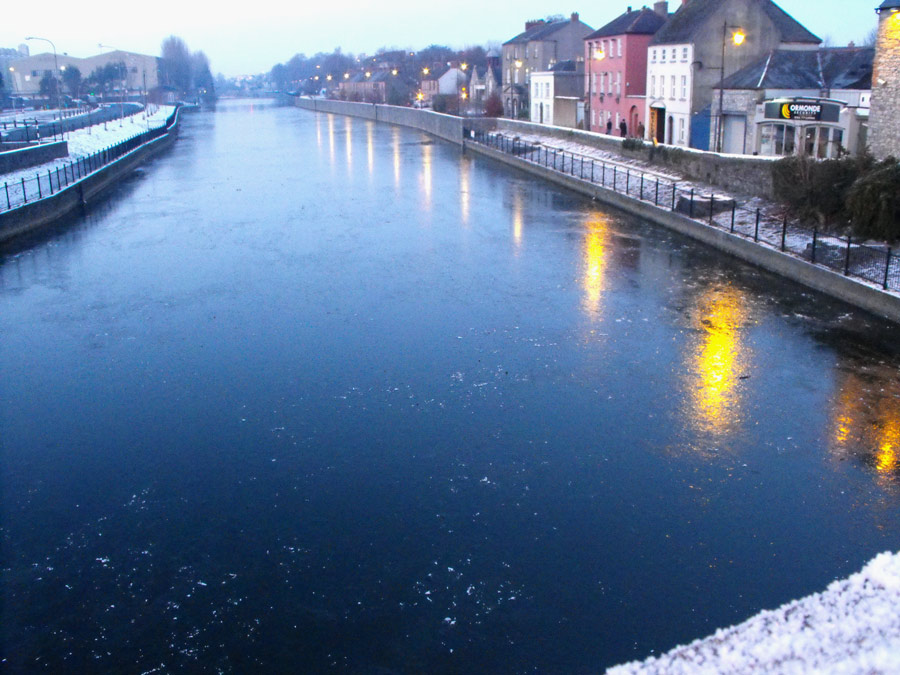 The frozen river Nore at John's Bridge on Christmas Day.

This was really the last of the cold spell. The weather chart above for Christmas Day already showed a deep depression off the coast of Newfoundland. This depression headed further north and west and brought with it milder, wetter air. By 9am on St Stephen's Day, the temperature had already risen to +3.9°. A rise of 16 degrees in 24 hours. The cold supply of Arctic air was finally cut-off and did not return for the rest of the winter.

However for many the problems associated with the extreme cold continued for many days later as water pipes froze solid and it was not until New Year's Day before supply was restored to many households.

So why did it all happen and could it return?

History tells us it could happen again. 1947, 1963 were equally bad.  Temperatures from Kilkenny Castle in the late 19th century show us that there were many severe winters back then too. There are many theories about, as to why it happened in late 2010. I will list a few here and you can make up your own mind!

* There has been considerable ice loss in the Arctic since 2000. In the autumn there are large areas of open sea far to the north of Ireland where once there were great tracts of sea ice. Some meteorologists suspect that this open sea is having an effect on early Winter snow patterns in Europe and Russia and changing the more typical weather patterns we are used to.

* Around 2009 there was a minimum of sun spots recorded on the surface of the sun. There is a belief that somehow this change on the sun affects the upper air especially at the poles. The actual mechanism is still under study but it is suspected that cosmic rays may play a part. The sun goes through a typical 11 year cycle and we also had a minimum in 1998. There was no real cold about then but it is noteworthy that the minimum in 2009 was far deeper and more prolonged. Since 2010 the sun spots have returned but solar observers are expecting this to peak by 2014 and then dip to a new minimum some time around 2020.

* Recent volcanic activity in Iceland and eastern Russia threw up considerable dust into the upper atmosphere. This can reduce the amount of solar radiation and may have an effect on weather patterns over the north Atlantic. I would tend to believe that this effect has been quite small, this time. (Back in 1815 there was a truly massive eruption at Mount Tambora in Indonesia and climatologists do believe that this was the reason why large areas of Europe and north America had such a poor summer in 1816 - dubbed the Year without a Summer).

* Whatever about our local cooling "blip" in 2009 & 2010, the global temperatures are staying consistently well above 20th century levels, 2010 for example was tied with 2005 as the warmest year globally in a 131 year record (according to NOAA - NCDC). Some climatologists say there is considerable proof now emerging that we will begin to see far more "extreme events" ie floods, heatwaves, cold snaps as the world warms.

Maybe there is no one best reason/solution from that lot. Maybe it is a combination of the above factors. But whichever, it certainly gets people  talking!