December 2015 was the wettest month on record at Kilkenny.

With a total of 242.3mm of rainfall (almost a quarter of a metre of rain) it easily  beats the next wettest month - August 1997 - when 203.3mm was recorded. It was also the mildest December ever recorded with a mean temperature of 8.7° (+3.4° above normal). The previous mildest December was 8.3°, recorded back in the mild and windy Winter of 1974/1975. The graph below shows the daily rainfall (measured at 9am each day). On everyone of the 31 days there was at least 0.2mm of rain. 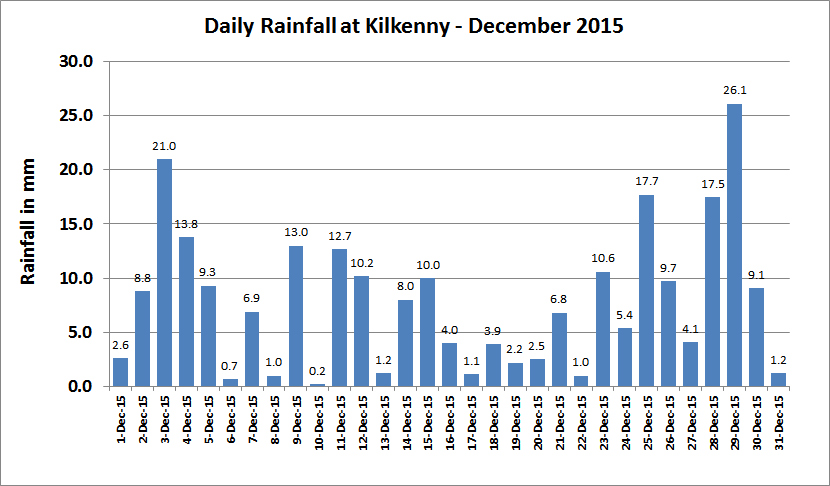 There was no daily rainfall record set during the month - the daily record still belongs to 1968 when 45.8mm fell at Christmastime. Despite no torrential daily downpours, it was the more continuous, incessant nature of the rain that eventually lead to so many flooding problems. There were ten days with 10mm or more rainfall. In particular, there were two peak periods of rainfall - the 2nd to the 5th and 25th to the 30th.

It didn't take long before the first flood problems arose. During Wednesday 2nd a wave depression formed to the south west of Ireland and this deepened further and was centred just to the south of Cork by noon on the 3rd. (see chart below). The whole system remained slow moving all through Thursday. 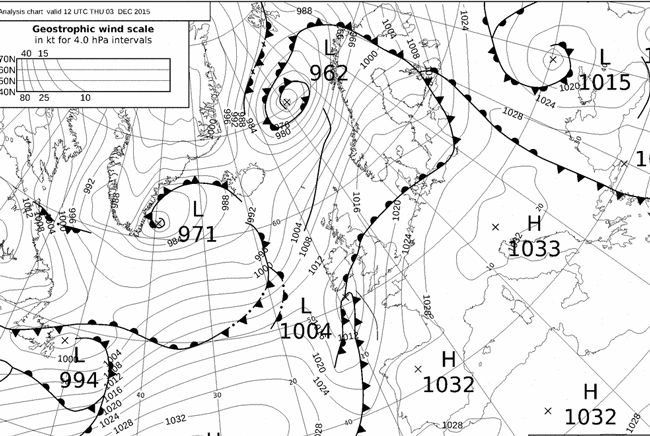 Rain began in Kilkenny shortly after 5am and continued until mid afternoon, when a total of almost 30mm had fallen. By Friday some of the smaller rivers, such as the King's river (see pictures below), had burst their banks. As if that wasn't enough, Storm Desmond, the fourth "named" storm of the storm season, was fast approaching. Rainfall associated with Desmond delivered a further 23.2mm, before finally clearing off early Sunday morning. (during this period a new UK 24 hour rainfall record was set at Honister Pass in Cumbria). 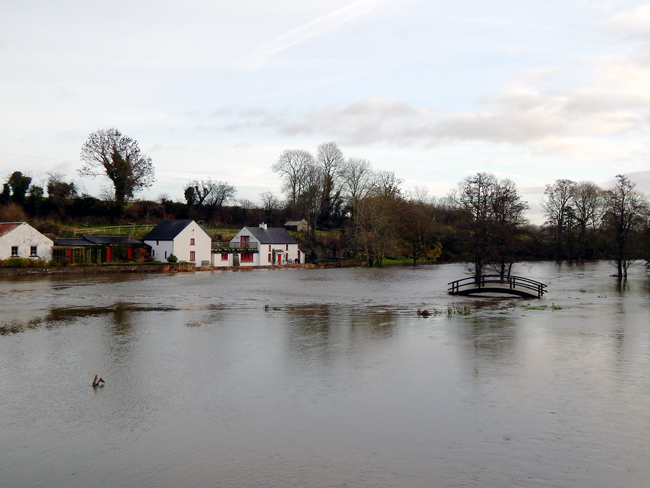 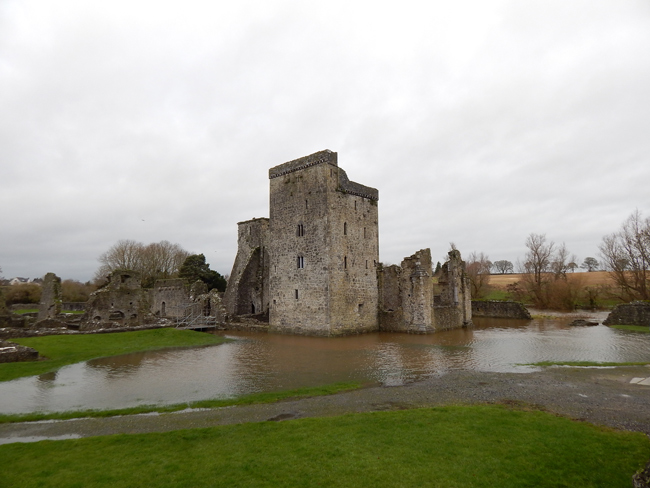 As we approached the month's end, with no let up in the rainfall, no dry weather,  the ground was well saturated and any rain that fell was going to run straight off the ground and into the streams and river courses. In the six days between Christmas and the 30th, a total of 84.1mm of rain fell. Here is the weather chart for midnight on December 30th, with Storm Frank passing on towards Iceland. 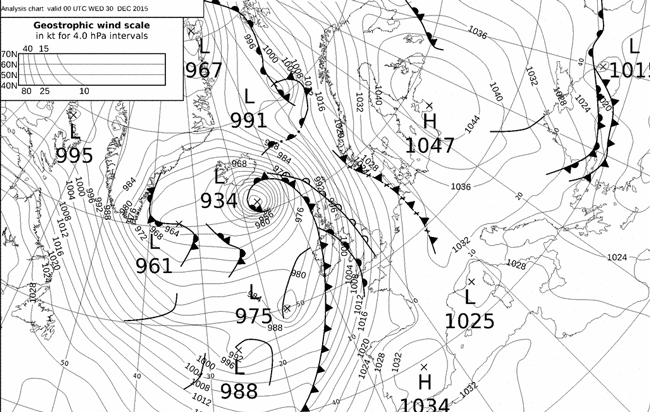 The rain reached its peak on Tuesday December 29th. It began in Kilkenny around 3pm and continued on through the night before finally easing off around 7am. Another 26.1mm of rain had fallen. At this stage the smaller rivers were cascading down the hills. Nowhere more severe than Graiguenamanagh, where the Duiske stream runs down from Brandon Hill. It turned into a complete torrent and poured through the streets  (see picture below - credit source Deric Hartigan). 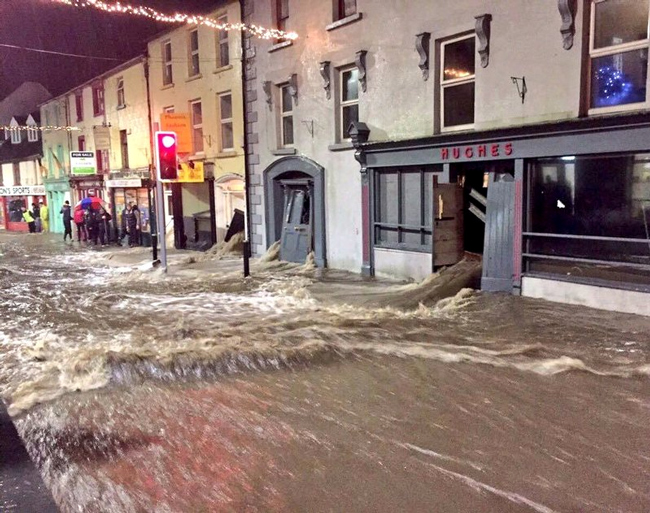 During Wednesday the 30th the bigger rivers began to grow and swell. The river Nore reached its peak at Kilkenny City during the late morning but peaked later on further downriver at Thomastown and Inistiogue.

The flood relief scheme at Kilkenny held firm and damage was very limited. The boardwark and linear Park was submerged for many days afterwards. North of the City, farmland was extensively flooded along the flood plains. However it was now Thomastown and Inistioge that bore the brunt of the flood. Conditions deteriorated in Thomastown all day and flooding even extended into Market St. (See Paul Doyle's excellent drone video at the end of this article. At one stage a small child had to be rescued from a house. Graiguenamanagh also suffered a second flood, this time from the mighty river Barrow. It was quite amazing that shops like Doran's Supermarket managed to reopen the next day after being hit twice. Both community and council combined to help those in dire need. Here are some more pictures taken on the 30th and days after. 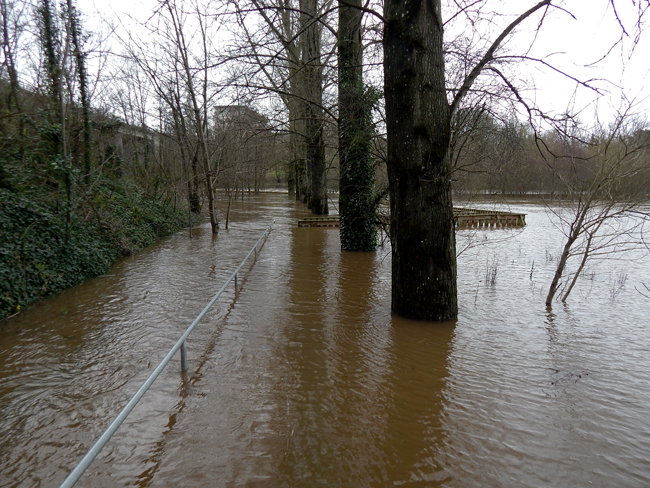 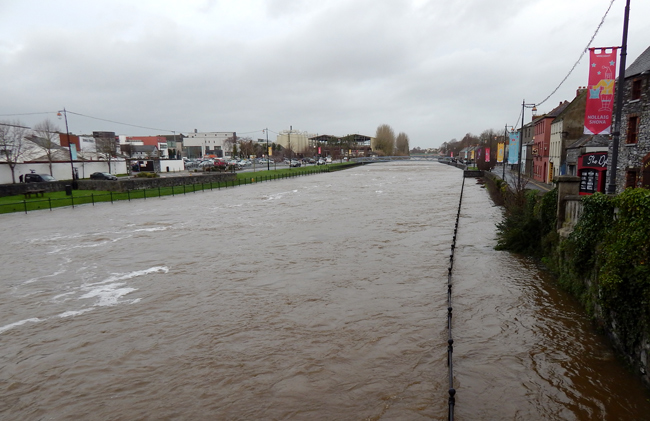 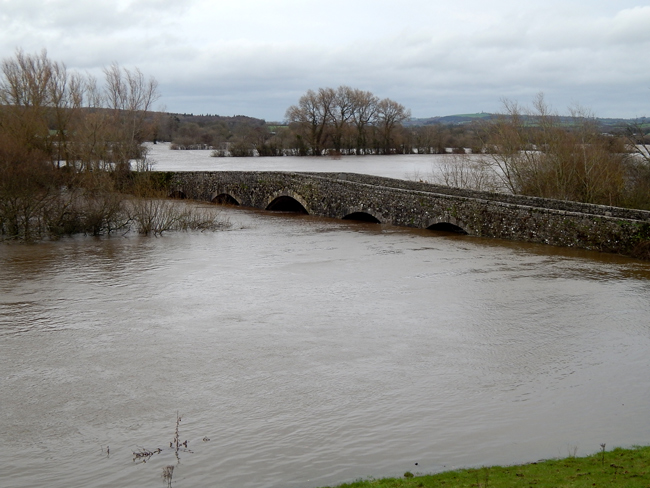 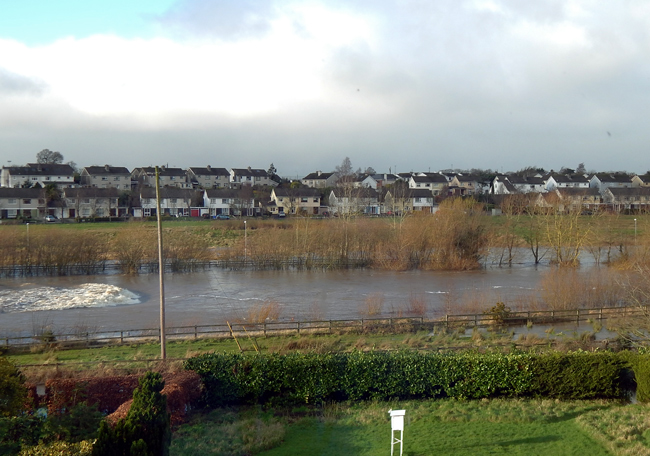 So why did it occur ? What are the underlying reasons for these floods?

As mentioned already, this was n't a flash flood - a flood brought about by intense/torrential rain over a short period of time. Nor was it like the famous flood of March 1947 which was  brought about through a combination of snow melt and heavy rain. The floods this December came about because of unusually persistent weather patterns which delivered very mild, almost sub-tropical air to our shores. Of course you will always get natural variability and some Winters are more predisposed to storm systems passing close to Ireland. But as Gerry Fleming, meteorologist with Met Éireann said, this December we got the natural variability coinciding with the effects of Global Warming (2015 was a very warm year globally speaking) and the periodic wholescale changes in the surface temperatures of the Pacific Ocean (otherwise known as El Nino).

Through much of 2015, mean temperatures in Ireland were actually below normal. However most of the rest of the World was already heating up quite dramatically. El Nino conditions began early in the year off the coast of South America, proceeded across the Pacific Ocean and then impacted on North America. El Nino can affect the jet stream patterns over the northern Hemisphere and it is the jet stream that steers the depressions across the Atlantic Ocean. All through Novemebr and December the pattern was very similar - with depressions passing passing between Ireland and Iceland but never making inroads into continental Europe. Over the centre of Europe a very large high pressure system remained. Look at the following graph of the surface air pressure at Zurich Airport in Switzerland. The air pressure never dipped below 1022 hPa the whole month long.

Having observed and studied the weather patterns and climatology of Ireland for many years, there is little doubt in my mind that the severity of these floods are as a direct result of man's activities on Earth over the past 100 years, in particular the considerable increase in the greenhouse gas CO2 ,due primarily to the burning of fossil fuels.