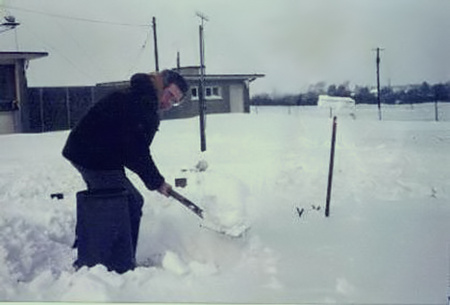 As mean (average) temperatures go, January ’82 was not a particularly cold one, however the period from 6th to the 15th will live in the memory of many. After a mild start (temp reached 13.2° C on the 2nd), the 6th saw temperatures fail to get above 5 degrees. As a deepening depression approached just to the south of Ireland, a biting east wind pulled in some very cold air from Britain and continental Europe, and the max temp on Thurs 7th was only 2 C. The occluded front associated with the depression gradually edged northwards over Ireland and at about 8 pm that evening, the snow came down and settled immediately. The snow continued into the next morning and the max level snow depth measured on Friday 8th was 16cm, with considerable drifting (as shown below). 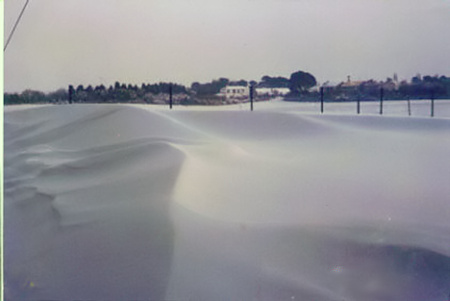 With all the snow and coupled with a cold east wind it was a frigid weekend. In fact the air temp failed to rise above freezing for the whole weekend from 6pm on Fri 8th until the afternoon on Mon 11th (briefly). The following morning (12th) saw the air temps dip to –13.4° C and the ground temp dropped down to a local record of –18.1° C.

For a brief period it looked as if the 1979 air temp minimum record would then be beaten the next night, because the air temp was already below –10° C at 8pm. But alas a light breeze picked up and prevented the temps from cooling much further. It still remained cold the next 2 days, until finally at 2 pm on Fri 15th, the cold siege was lifted and temps edged over 5° C for the first time in 10 days. This cold event was also notable in that it was the last time (until Jan 2010) in Kilkenny that ice had frozen to such a thickness as to support the weight of an adult. I well remember putting it to the test and armed with hurley sticks we played our own brand of ice hockey/hurling!