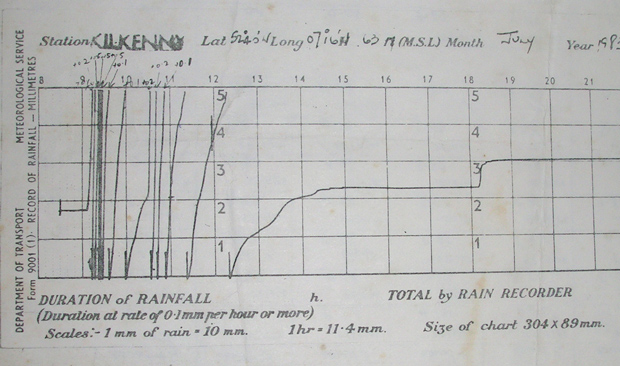 Mid July ’83 was a very warm week. The temps peaked at 31.4° C. Just following these high temperatures, on the morning of Sun 17th, an intense thunderstorm moved up the Nore valley. The picture above shows the intensity of the rain recorded that morning. The top x axis is divided in 1 hour segments. Now during a typical rain event the rain recorder tracer would only rise slowly (for example as shown on the right hand side of the graph) and a rise to the top (5mm) in 1 hour would be considerable.

However the rapid rise and fall shown between 9Z and 10Z indicates very intense rainfall. In fact close analysis of the chart above yields the following intensities:

This type of rain intensity (nearly 1” in 15 mins) is quite unusual for Ireland and is one of the highest ever recorded at an Irish Synoptic Station. The thunderstorm was quite slow moving, local to the Kilkenny area and not accompanied by hail. The ground was parched and hard beforehand and as the rain bucketed down it behaved like concrete, with little absorption. Just when things were beginning to reach crisis levels and cause untold damage the rain subsided and widespread flash flooding was avoided. Even though the majority of the day’s rain was recorded in only 2 hours (57mm), the 66.4mm recorded for the full day was the highest daily rainfall ever recorded in Kilkenny.