The summer of 1985 was pretty abysmal. The mean temperature for September was almost 1 degree warmer than August. The most noteworthy event though occurred on the night of 25th/26th July. The synoptic situation at midnight showed a shallow low pressure system (1006hPa) off the south east coast. Pressure was falling slowly as an airflow of continental origin tended to displace the moist Atlantic air over the country. As a result widespread and spectacular thunderstorm activity occurred throughout the evening of the 25th and continued overnight. This storm is remembered by many as the worst in living memory.

Much of the spine of Ireland was affected (from Cork to up to Tyrone/Armagh). Kilkenny was one of the worst affected. A feature of the storm was a spell of very heavy rain and violent hail of 30/60 mins duration. This burst arrived in Kilkenny at about midnight. There were frequent cloud to ground strikes and just when you thought it had passed a new cell arrived and it began again. This continued for several hours. In all 49.7mm of rain was recorded during the storm and there was much damage to crops, buildings and many farm animals were killed by the lightning. 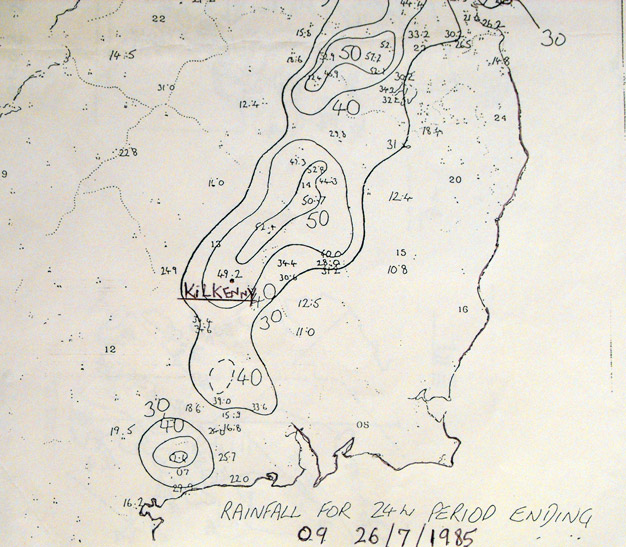 Chart showing 24 hour rainfall totals (in mm) in the east and south east.