The storm on 12th February ranks as one of the worst ever in Kilkenny. It was an absolute miracle that nobody was killed by any of the numerous falling trees. It could not have occured at a worse time - just when the schools were closing. At one stage near 4pm all the major roads into the City were blocked with fallen trees. This was the scene the next day at the Ring Road: 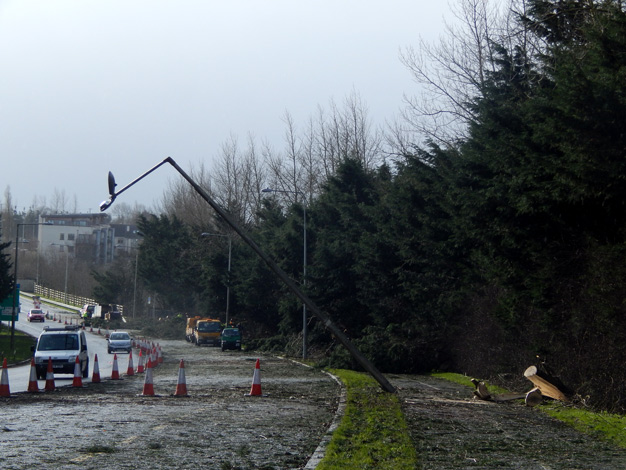 So how bad was it, compared to other storms? My weather station provides official measurements of rainfall and temperature to Met Éireann. I also monitor the wind speed at a roof top height. The house is well exposed, especially to all points west.  At 2:57pm at the height of the storm, I recorded a wind gust of 133 km/hr (83 mph). This ranks as the joint highest wind gust ever recorded in Kilkenny in the month of February (tied with the gust recorded at the old Kilkenny Met Station in February 1988). The old Met station recorded windspeed on top of a 10 metre mast, clear of any obstacles. My mast is smaller than the one used by Met Eireann, however the combination of my house and mast elevates the anemometer to a similar height of approximately 10m above the level ground.

There were only 4 months on record that produced gusts higher than 133 km/hr (going back to when the old Kilkenny Met Station opened in 1957). They were:

So the storm on Feb 12th was easily the worst since the Christmas Eve storm of 1997 (which also left many without power for weeks). The storm began life 2 days earlier and was just a disorganised low pressure system just south of Newfoundland by 6pm on Monday. During Tuesday it drifted east across the Atlantic and encountered some very cold air streaming down from eastern Canada. This had the effect of deepening the storm and it moved on quite rapidly from then on. By 6pm on Tuesday it was right in the middle of the Atlantic with a central pressure of 981 hPa. 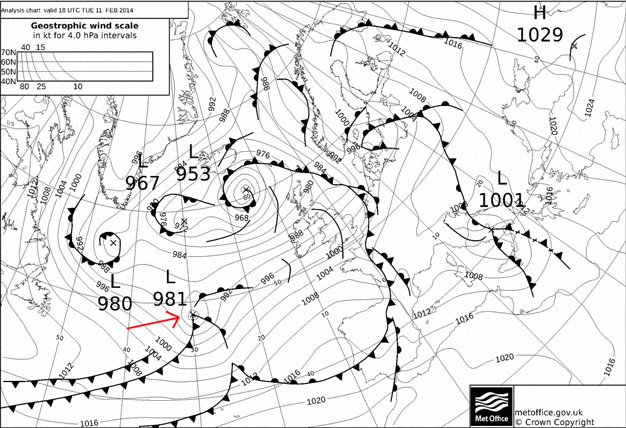 Visually, the storm was beginning to take on a characteristic circular cloud head. You can almost make out a peculiar face in the cloud in this image taken on Tuesday evening. 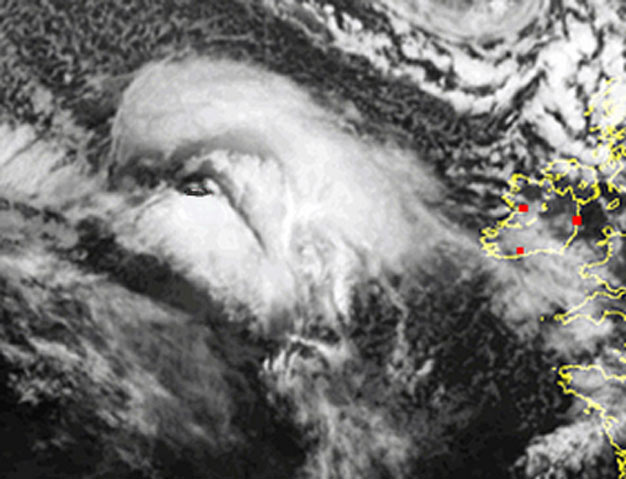 Early Wednesday the storm deepened rapidly and by 6am central pressure was already down to 955 hPa and the centre was around 150km west of Kerry. Rain and strong southerly winds pushed up through the country and a gust of 85 km/hr was recorded at Kilkenny shortly after 11am. However the main rain belts then passed through, the weather cleared up and the wind gusts eased back to 40 to 50 km/hr. Here is the chart for Noon on the 12th. The centre at that stage had moved into Galway Bay. However as often happens with these storms, the sting was in the tail. The black line wrapped around the centre represents an occluded weather front and at the end of it, lie the strongest winds. 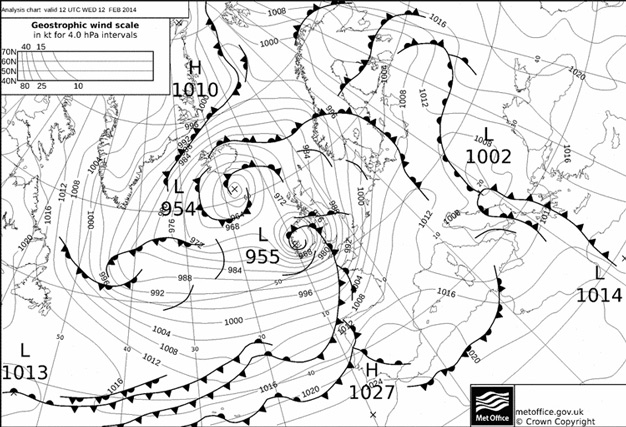 Here is a close up visual satellite image of the storm just after noon. The red arrow points to a band of cloud still off the west coast. Associated with this cloud is a channel of very strong winds. By 2 pm these winds reached Shannon Airport and produced a gust there of 159 km/hr. This was the strongest gust recorded at the Airport site since the remains of Hurricane Debbbie passed over in September 1961. 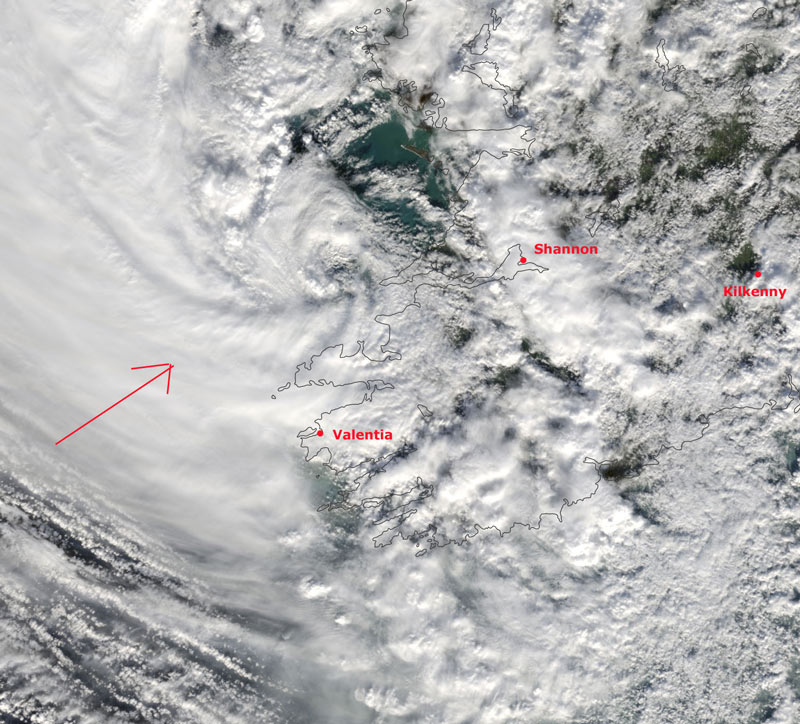 At this stage, Kilkenny was in the bee line. Below is a chart of the average windspeeds and gusts that I recorded on the 12th. The onset was quite rapid. Shortly after 1pm and the wind gusts had increased to around 80 km/hr. Then the first of the big gusts arrived at 1:45pm. It reached 116km/hr. Windspeeds of 120 km/hr is often considered as a good threshold/indicator as to when trees will fall. Sure enough after that very strong gust, the power went. Unfortunately this meant that my usual data logger ceased to operate until power was again restored a little after 3pm. Fortunately the base unit of my anemometer does have battery back-up and this base unit was able to keep track of the time and strength of the highest gust during the time my power was down. The wind gusted to a max speed of 133 km/hr at 2:57pm.  (see picture below)

When full power was restored my data logger picked up from where it left off at 1:50pm. (as explained earlier, the logger did miss around 80 minutes of data - hence the flat line section of the graph above). There was another gust then of 128.3 km/hr at 3:15pm but after that it started to subside a little. There were still gusts of over 100 km/hr right up to 5pm. The scene outside at this stage was very bad with numerous roads blocked, leading to the City. Credit here must be given to the local authorities who were immediately on the job. This picture was taken in Loughboy at 2:30pm. 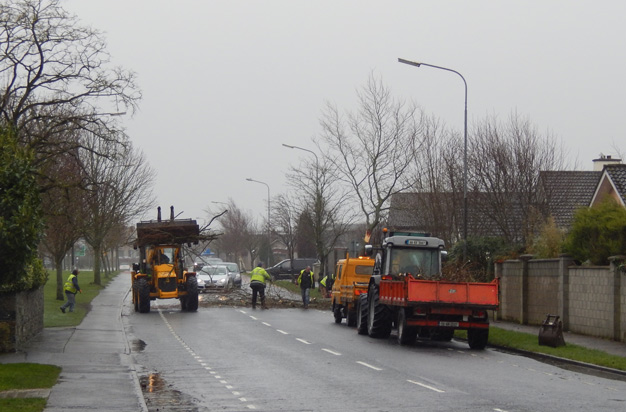 An unusual feature of this storm was the 2 hour period from 1:30pm to 3:30pm when this belt of very high winds made their way across from Clare, Limerick over to Kilkenny. The top wind gust recorded at Kilkenny was even higher than that recorded at the very exposed Cork Airport hill top site. This table below shows the top 10 max gust speeds recorded at Met Éireann stations and 2 Private Weather Stations (Kilkenny and Durrow). Kilkenny is usually the least windy location in Ireland, so it is all the more remarkable that Kilkenny managed to reach 6th place following in behind the more typically windy coastal stations (such as Sherkin Island or Mace Head). 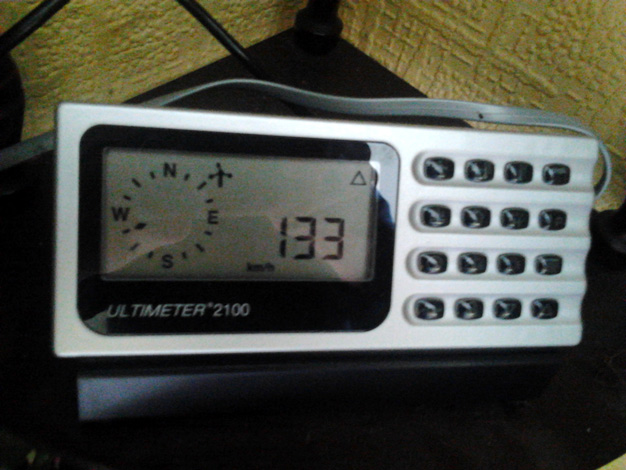 Further east of Kilkenny, the max speeds were a little lower. Tullow in Co. Carlow gusted to 109 km/hr and Ashford Co Wicklow gusted to 101 km/hr. This channel of high winds continued to pick up however, as it crossed the Irish Sea and the top gust in the UK of 175 km/hr was registered at Aberdaron in West Wales near to 4pm. (Ireland's top gust of 178 km/hr was recorded on the Kinsale Energy Platform at 1pm).

As mentioned already there were numerous trees knocked (the sodden ground would have also contributed to this). Here are a selection of photographs taken on the day after the storm, with the clean-up well under way. I have also added a short video at the foot of this page which captures the conditions that eventful afternoon. 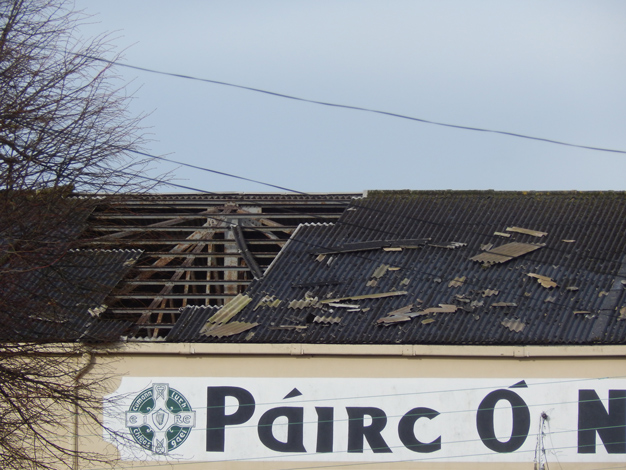 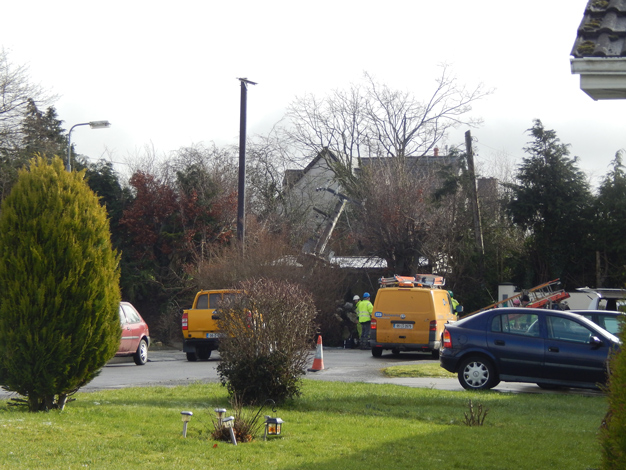 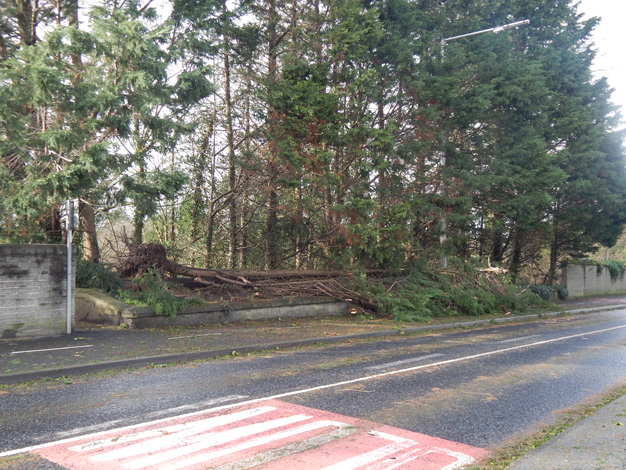 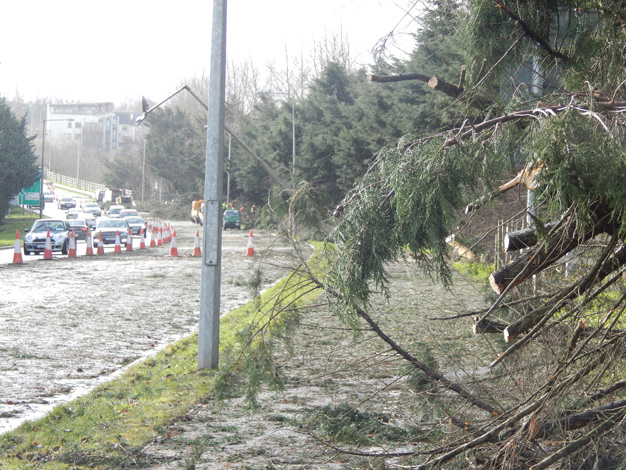 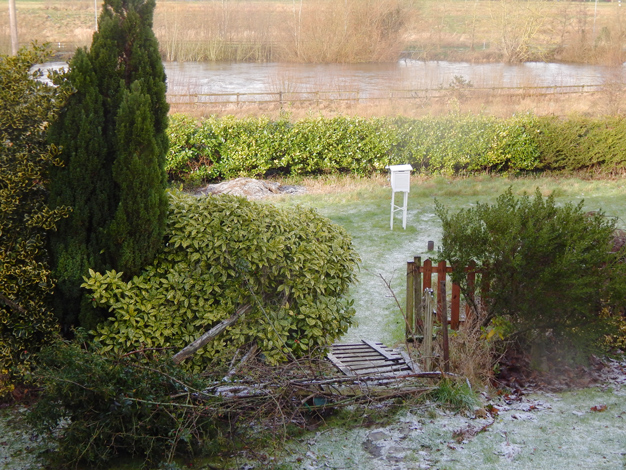 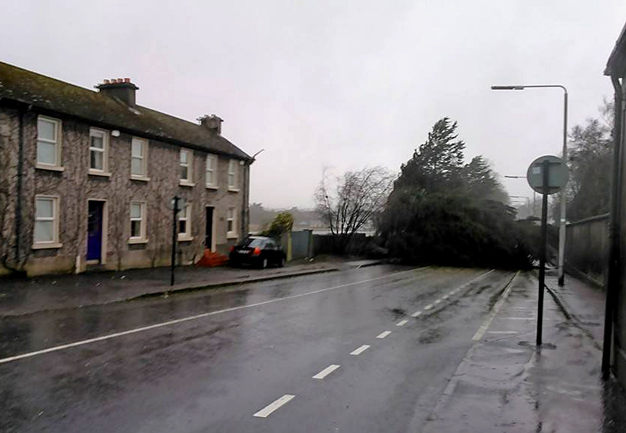 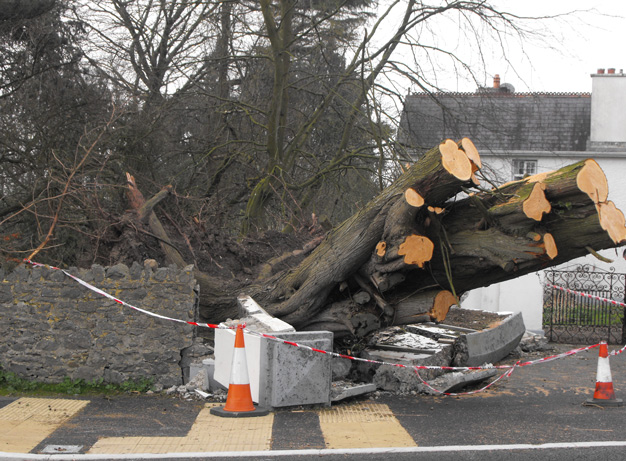 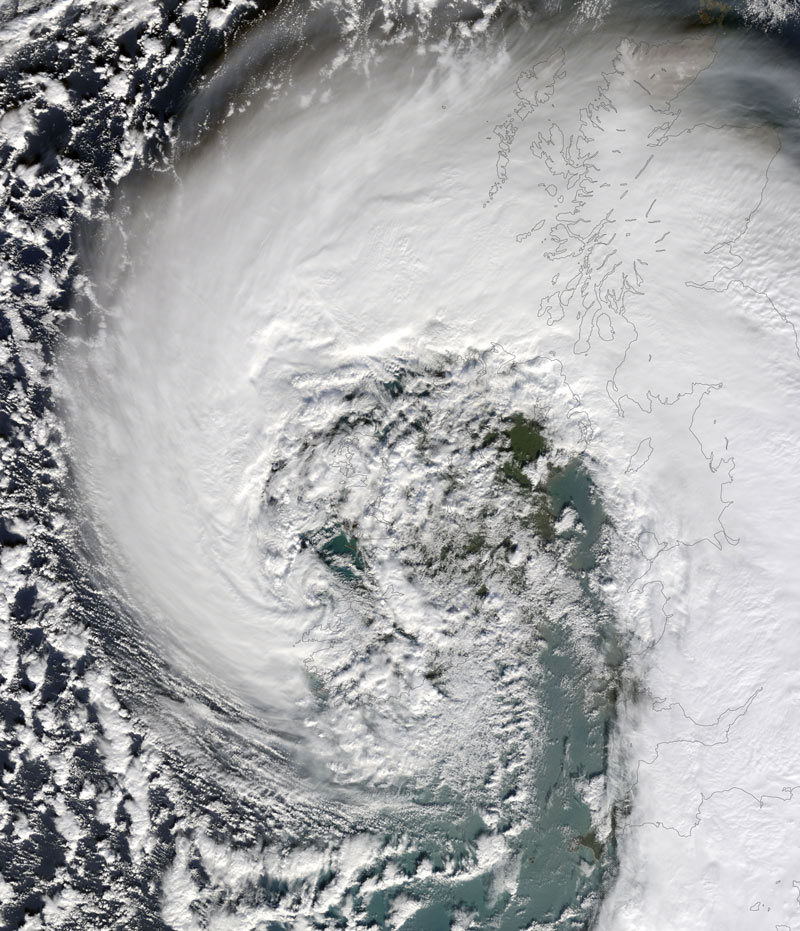